Flicking through photos today I noticed that C was wearing the same sleepsuit today, aged 10 weeks, as she wore on the day she was born.

‘Hasn’t she grown?’ etc etc. which of course is a bit double edged given her slow weight gain to date…

She is indeed growing up though, as today was her long awaited first jabs, which she took like a pro.

She was obviously trying to butter up the doctor beforehand, as she was flashing him her biggest smiles. And it must’ve worked too as she barely flinched for the first one and had just a couple of seconds of crying for the second.

The doc was also kind enough to prescribe us some better eye drops to deal with her lingering gunky eye, which she’s kindly passed on to me.

Well I guess it was my fault she caught her first cold, so she’s only getting her own back. 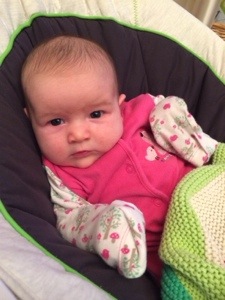 C was a big baby, weighing in at a whopping 11lbs 5ozs. But after going down to just under 10lbs 9ozs after birth (a loss of 7% so perfectly normal), she’s taken her time over regaining her birth weight.

Despite rapidly dropping down the weight centiles on the handy growth chart provided for paranoid mothers everywhere, it’s not something we’ve been particularly worried about. She has been gaining weight, albeit slowly, and is bright and alert with plenty of nappies to attest to her taking in her milk.

But you can’t help but wonder… Am I feeding her frequently enough, or for long enough? C has a fairly obvious lip tie, could that be affecting her weight gain? Is there a tongue tie hiding away in there too? Is there something wrong that I haven’t picked up on? Or is it as simple as her prolonged cold (now mostly gone thankfully) impacting her feeding?

Even though my midwife hasn’t been worried, who’s to say whether the next healthcare professional we see might suddenly be concerned that we aren’t fitting the ‘normal’ pattern, and launch us into a world of deadlines for gaining weight, feeding schedules and top up feeds? I’ve sadly known women feeling almost bullied out of breastfeeding in this way, despite the ‘breast is best’ mantra being echoed from every rooftop.

But this isn’t the time or place for the Great Feeding Debate. C shows every sign of being happy and healthy, and maybe she’s just inherited her father’s metabolism, which I’m sure she’ll be grateful for when the self conscious teenage years inevitably hit us.

I guess my concern is all just a natural extension of what my other half calls ‘fretful mother syndrome’ – an apparently unavoidable side effect of becoming a mother, even with a second child. I say ‘mother’ without wanting to be sexist here – I’m yet to find a father who suffers with this, but I’m sure they’re out there somewhere as well.

Anyhow, I digress. But with all this running through my mind, you can imagine how pleased I was that at the grand old age of 7 weeks, C has finally regained her birth weight, plus a teeny bit extra just for the hell of it. Go C!

Whilst comparing does nobody any good, she’s no longer a particularly ‘big’ baby – in fact she’s over a pound lighter than her sister was at this age. This at least means her 0-3 month clothes should last us a bit longer.

Whilst I’m happy she’s gained the weight, I was less happy to remember that this also marks the end of our journey with our fabulous midwife, Lisa, who officially signed us off yesterday. I’ll write some other time about my experience with her and One to One midwives, but suffice to say we will miss her, lots.

And given Lisa has been the main person talking me out of my fretful mother moments so far, I guess we should expect plenty more of them in the future.