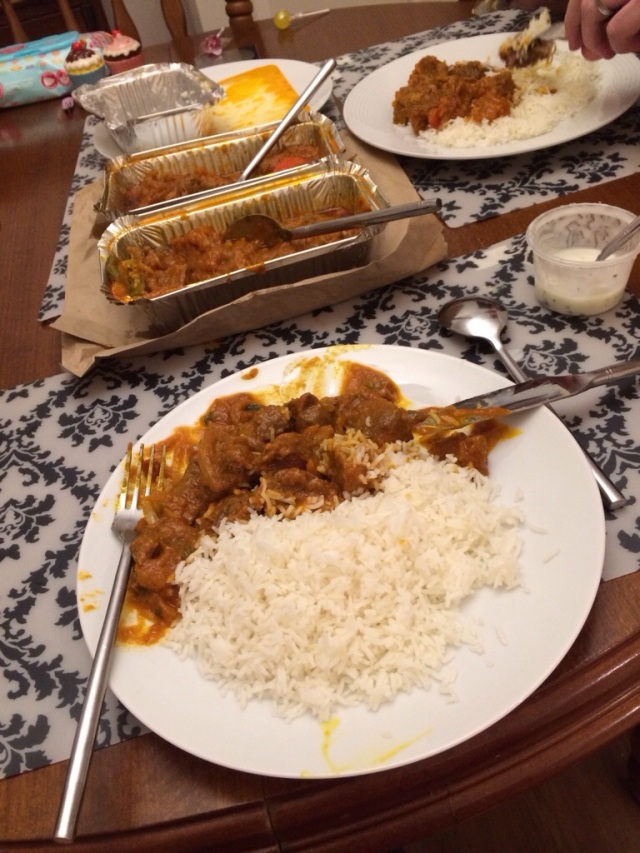 So here we are again!

I’m now 8 days overdue with nary a niggle to suggest anything might happen soon.

I went into labour naturally with G at 9 days over, so I have high hopes for things kicking off tonight, but we’ll see.

I kept getting asked through pregnancy how this compared to my first, and the only answer I could give was ‘kind of the same, but a little bit more‘.

I didn’t have much morning sickness first time. This time, a bit more.

My hips were a pain last time. This time, a bit more, and my back decided to join in too.

My wrists played up last time. This time, full blown carpal tunnel in both so definitely a bit more.

I had a big bump last time. This time, a bit more.

I went 9 days over last time. This time, will it be a bit more too?

The one thing that has changed is my choice of overdue distraction techniques. Last time round, living in Manchester’s Trendy Northern Quarter (TM), we wandered / waddled round the local pubs (diet coke for me!) and curry houses, went to the cinema and even gigs, and, er, baked bread, apparently.

This time suburbia and a 4 year old means I’ve instead spent my time shepherding G round ballet and football classes, Christmas fairs and nativity plays, sewing, crocheting and, of course, sleeping. Not that I’m complaining, particularly regards the latter.

With the threat of induction looming next week I’ve been throwing the book at ‘Operation Baby Out!’ with all the old wives tales, none of which I really think work, but have got to be worth a try.

Some things are inevitable when you’re pregnant.

But it’s not just the obvious things – it’s the morning sickness that doesn’t stick to its designated morning slot, the inexplicable weeping at anything vaguely heartwarming (Christmas adverts it appears are amongst the worst culprits), and the way that suddenly a growing bump becomes public property; open for anyone to touch, coo and comment over at any opportunity.

It’s enough to make you think nobody has ever seen a pregnant woman before, and the exchanges become increasingly predictable from about 26 weeks onwards:

Seriously, when has it ever been acceptable to tell a woman they’re huge?

And don’t get me started on the people who say “wow, you’ve grown!” – er, I am growing a baby you know, that’s kind of what’s meant to happen?

Whilst I’ve come to the conclusion that most people just don’t know how to speak to someone who’s pregnant, my sympathies start to crack when it comes to those who’ve clearly been through it themselves – the latest being a lady pushing a newborn baby around Asda exclaiming to me “blimey, I thought I was big when I was pregnant!”.

Er, thanks for that love.

You would think by the time you reached the ‘one week to go’ milestone people would ease up on the “really? You look ready to burst” retorts, but it seems only now that I’m overdue do you start to get a bit of actual sympathy.

Of course, now I just have to learn to cope with the new, inevitable, conversations:

“Yikes, I’m impressed you’re out and about!”
What, I’m supposed to shut myself away in the house until baby decides to rock up?

“Well don’t go into labour here!”
Like if it was in my control I’d choose to drop in the middle of a supermarket! Though then again there’s all those rumours of free groceries for life…

“Should I call an ambulance?”
If I needed one I sure as hell wouldn’t be stood here counting out loose change. And you do know that childbirth is nothing like they show it in the movies, right?!

And the classic, usually delivered by text, or occasionally posted on Facebook walls…

“Any sign of baby yet?”
Yeah, I had her last week but just didn’t bother to tell anyone…

Yep, some things in pregnancy are inevitable. And at this stage, now officially ‘overdue’, the one inevitable thing I’m holding on to is that this baby will be coming out, sometime soon, one way or another.

And no amount of wondering, worrying or text messages will have any impact on when that is!